Thank you! Your submission has been received!
Oops! Something went wrong while submitting the form.

11 Principles for a Fulfilling Day 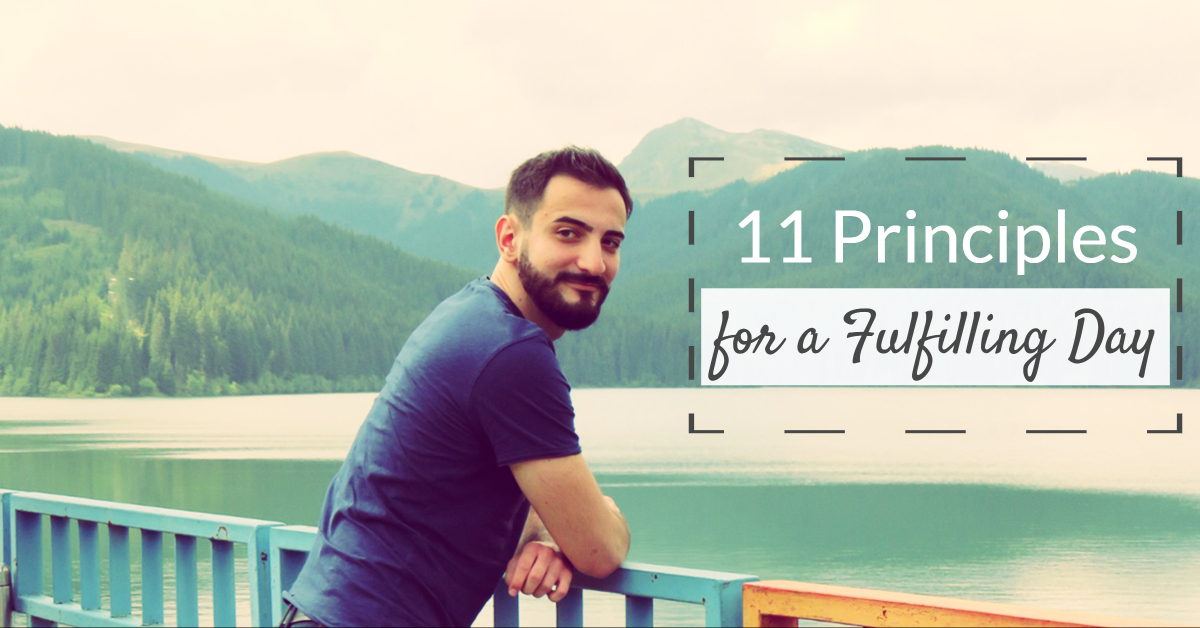 This is my "challenge accepted!" post, specifically Ray Dalio's challenge from his book, Principles: Life and Work.

It encourages people to write their own lists, which I already had, but now decided to also turn it into a public post. Not sure why. But I wrote it, and I've spent a healthy amount of time on it, so here we are.

The first ones are pretty broad and obvious, but too meaningful for me to skip. Some are a little bit more specific, and I try to dig into those ones more than the rest.

1. Be kind and honest with everyone around you, including yourself.

To paraphrase Seneca, kindness is a virtue that never fails.

It's the single most powerful way to build lasting relationships and to feel fulfillment and satisfaction from both your work, as well as every other interaction you have on throughout the day.

What we can sometimes forget tho, is that we should be applying that principle to ourselves too. What I mean is that rather than being hard on ourselves when something isn't going our way, we'd often benefit a lot more by taking it easy instead.

Forgive yourself for your mistakes when you make them so that you can move on and work on getting past them or fixing them.

2. Treat people with respect, regardless of how you feel about them.

Respect is a virtue, and as such, it demands to be practiced in every situation - not just when it's convenient.

3. Smile often and appreciate the people around you. Take an interest in who they are and the things that make them special.

I believe that few things can influence your mood more than the people around you. That's an opinion. What isn't an opinion, but rather a fact backed by science, is that human emotions are contagious.

What does that mean? It means that your feelings affect the feelings of the people around you. That's because people are empathetic.

Have you ever been in a situation in which you were told a joke that you didn't find funny, but the laughter of the person (or people) next to you made you laugh as well?

That's what I mean.

If we sit next to someone who appears to be sad, we are likely going to be saddened by them ourselves. In contrast, friendly people rub off on us in the same way.

Color me idealistic, but I want to be someone who puts other people in a good mood, who can make others feel special and important - because we, each of us in our own way, are.

Now, I do feel I have to clarify tho, that just because I find this principle important, it does not mean I'm going to be spending my day chatting everybody up and grilling them about everything from how their day is going to their perspective on, I don't know, the meaning of life.

It's really a principle I try to apply *when* I'm having a conversation, and not so much as a reason to start one.

4. Be present in the moment and get out of your head often.

Speaking of being an introvert, I tend to have an easy time of getting completely lost in my own thoughts and becoming virtually oblivious to everything that is going on around me... which is not something you want to happen, a lot of times.

Meditation has helped me a great deal in this respect. It used to be virtually impossible for me to pay attention (be present) to what's going on around for more than 2-15 minutes at a time (and I'd really have to try for those 15 minutes). Now that's very different.

But why do I think it's so important for us to learn to get out of our own heads more often?

Well, because there are a lot of things we miss on a daily basis. Little things that we could very easily enjoy if only we paid a little bit of attention to them. This is especially true when you're out with friends (and a great reason to keep your phones silenced and in your pockets when you are), but also true of many other things.

One little experiment I occasionally like to play on my way to work is to just put my phone on silent, "lock it up" inside my pocket, and, as I'm walking, look around for little things that can make me smile.

A cute pet, nice weather, other people smiling, happy couples, a healthy looking tree in an otherwise concrete-covered city, you name it. The range of positive influences will feel a lot wider when you start to pay attention.

I've enjoyed quite a number of different hobbies in the past one-and-a-half or so years (CrossFit, dance, cooking, gym, martial arts, drawing). One of the things I really enjoy about all of them, besides the obvious appeal of the activities themselves, is how much they influence my ability to stay disciplined when I need to be.

Every one of the activities I've listed above (and many others I didn't) do a great deal to help us foster and integrate discipline into many other important aspects of our lives.

For a long time, discipline has not been a quality I've been known to have, so it eventually became one that I've felt I needed to learn to appreciate and foster consciously.

The great thing about it is how consistent and reliable it is.

Motivation is a fickle thing. Sometimes we have it, other times we don't.

Nobody is always motivated. Some people may be more naturally motivated than others, but motivation alone is never enough to lead a consistently successful life because we all have our off days. So what do you do when those days come?

Well, a disciplined person doesn't need to feel motivated in order to do his or her job.

When discipline is on your side, motivation becomes just an added (and admittedly valuable) bonus - a nice boost, if you will, to your productivity and effectiveness.

This is the reality of how things work: the world won't wait for you to feel like doing whatever it is you say you'll do. Practice discipline and watch how consistent and effective you can become.

6. Be intentional about everything you want.

One of the things I've had to learn the hard way is that great things will (almost) never just come to you. Most of the time, you'll have to ask for them, work for them, be clear about them, over and over again until you get them.

Don't spend too much time trying to be subtle.

If you really want something, make it your priority and let it be a driving force throughout your day.

7. One action, one success, one failure, is always still just one.

In life, there is really only one "finish line" - and I'm talking about the last one.

Between now and then, everything we do, successfully or otherwise, will only last for a limited amount of time. To me, this means that I should treat both wins and losses objectively, and remain mindful of the fact that after they happen, it's time for me to count my lessons and move on to the next thing.

It's a humbling reminder to have after a success and an empowering reminder after a failure.

8. Lead with confidence and calm.

I paraphrase Richard Branson in saying that "if the host feels good, the audience is likely to feel good too". This kind of brings me back to what I said earlier about human feelings being contagious.

When you're in any kind of leadership position, or if you just need to be convincing about something, one of the most effective things you can do to get the other person (or people) to believe in your ideas is for you to believe in them first.

In other words, be confident if you want other people to have confidence in you.

9. When dealing with tougher challenges, ask yourself this question: "If you were the best version of yourself right now and this were easy, what would the solution look like?"

When the reality of how you feel simply doesn't want to be the way you want it to, nothing beats a little roleplay.

It's a useful little trick I picked up from Tim Ferriss. But for more on that, I encourage you to just listen to his kick-ass TED speech here, because I can't sell it as well as he can.

10. When you decide to take a risk, do it with strength of mind and bravery.

This is one of the many principles I borrowed (and rewritten in my own words) from Ray Dalio's book I mentioned, which easily lands in the top 5-10 books I'd recommend everyone reads.

It's an obvious good principle, but the real lesson here is how important this one is to the world's most successful people, and how much it drives their attitude and everything they do.

Just take any highly successful person and look at the way they deal with criticism. The more influence you have, the more your decisions become scrutinized.

It's important to be mindful of what other people may think and how they may react to the things you plan to do (whether that's on a large scale or not), but at the same time, we should never allow ourselves to become paralyzed by the prospect of criticism.

Dare to make mistakes. Dare to expose yourself to potential failure. In the vast majority of cases, mistakes can be fixed and failures can be overcome.

Side note: this all does not mean we should be going around risking our livelihoods on a daily basis. On the contrary, I think it's important for us to limit our risks and avoid big ones as much as possible, as long as that doesn't stop us from making the (ethical) progress we seek to make.

11. When you're making things easier for others, remember to always make them as easy as possible for yourself too.

We too often help other people by making our own lives more difficult. If you can think of ways to make something better for others, use the same logic on yourself too. Help, but think... "how can I help more easily?".

I'll end with this: putting your own principles down in writing is a great exercise I would encourage everyone to do. As soon as you write them down, they go from feeling like a mere "nice thought" to a conscious decision you've now made for yourself and are ready to start exercising.

Now I hope you have a wonderful day and that, before it ends, you come up with at least one more reason to smile 😊